Things to see and do in Galicia: ten places to visit in and around the Ría de Arousa estuary 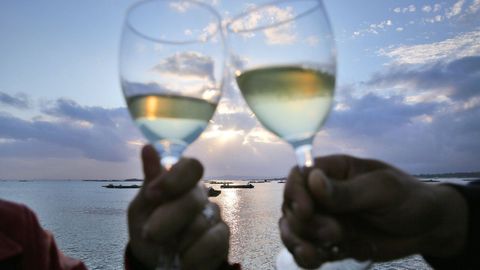 The end of the high season is the perfect time to discover the charms of the Pontevedra coastline, which attracts thousands of tourists every summer.

From the towers of Catoira to the beach of A Lanzada, while passing through the pazos (traditional dwellings) of Cambados or perhaps taking in the numerous viewpoints to be found in Vilanova. There must be something special about Arousa to bring in thousands of tourists every summer. Little wonder then that the end of the high season is a great time to discover this magnificent destination, which avoids the tourist hotspots and offers more affordable prices. As it is the largest estuary in Galicia and one that divides the provinces of A Coruña and Pontevedra, we will focus our gaze on the Pontevedra shoreline. From the river Ulla to the island of Sálvora, taking in A Illa and O Grove, here are ten places you absolutely must visit. 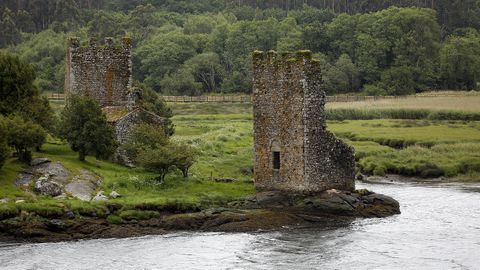 Every first Sunday in August they see hordes of invading Vikings. What’s being invaded, you ask? The Oeste Towers (Torres de Oeste), in Catoira. Lying on the banks of the river Ulla, it is an essential visit if you are in the area.

The Torres de Oeste are in fact the ruins of a castle that was instrumental in protecting Santiago from marauding invaders, such as the landing commemorated at the Viking Festival of Catoira. During the 9th and 10th centuries, there were several occasions on which this fortress acted as the “key and seal of Galicia”, as it was used to prevent the passage of ships from the Arousa estuary to the river Ulla; a route steeped in Xacobean tradition and said to be how the remains of Saint James the Great were carried to his final resting place.

When visiting this enclave, be sure to stroll along the wooden walkways that surround it, which have become a paradise for influencers. 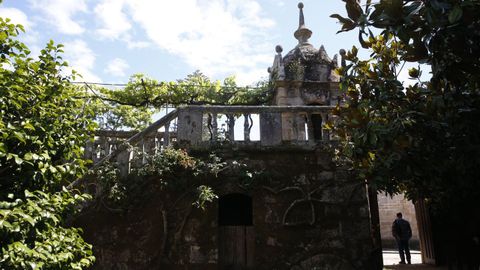 Defensive forts such as the one at Catoira extend along the entire length of the Arousa estuary. Without having to venture further afield, one of the most recognisable symbols of the homeland of Albariño wine is San Sadurniño tower. That’s right, we are talking about one of the most emblematic postcard images of Cambados, lying right next to the Pazo de Fefiñáns palace, which was built in the 16th century. Renaissance in style, it would undergo subsequent extensions and modifications as new owners took over, making it a stone canvas of sorts from which visitors can make out the history and architectural legacy of Cambados. It currently houses two bodegas (wineries) with Rías Baixas Designation of Origin, although an entrance fee is required. 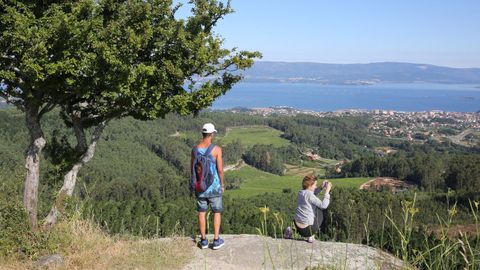 Arousa is a land of wines. A great way to see this for yourself is to look down from up high at the countless vineyards dotted across the landscape below. And where better to head than the viewpoint on Mount Lobeira. Located in Vilanova, it is the quintessential viewpoint on the Pontevedra side of the estuary. The view stretches from O Grove to Catoira, passing through the Umia valley and even the island of Ons, which can be seen in the Pontevedra estuary.

The most spectacular panoramic view is from the Cruz de Lobeira, a monument to the countless victims claimed by the sea located at an altitude of almost 300 metres. When making the ascent you will also be walking among mámoas (ancient tombs) and remains from the Castro period. 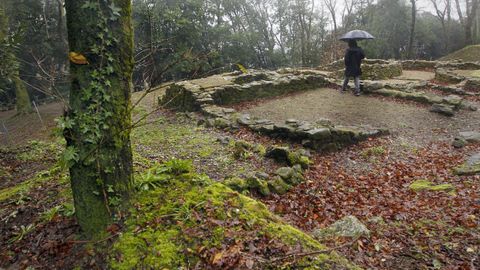 If what you’re really after is to travel back to Celtic times, the best-preserved site can be found in Vilagarcía. We are talking about the Castro Alobre hill fort, a settlement dating back to the 1st century BC and which remained inhabited until the 5th century. It is located in O Montiño, just outside the town centre.

Still in the municipality of Vilagarcía, this time in its waters, we have the magnificent island of Cortegada. The majestic Parque Nacional das Illas Atlánticas (Galician Atlantic Islands National Park) is a treasure worth exploring, among other reasons because it plays home to one of the few laurel forests currently existing in the world. Also nestled among its ancient trees are an abandoned village and the ruins of a hermitage  —that of the Virgen de los Milagros— to which pilgrims would flock to have their afflictions cured. Even reaching the island is an experience in itself, as to do so you will need to cross the estuary. 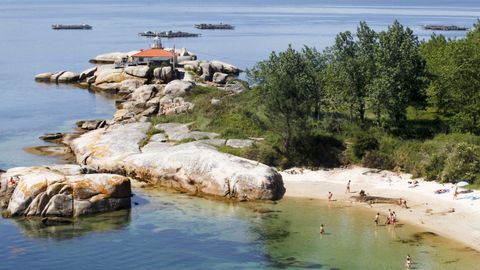 Beach and lighthouse of Punta Cabalo, in A Illa. MONICA IRAGO

The Arousa estuary features various islands. However, some of them are not quite as isolated as you might imagine. A Illa is one such example, being one of the most touristy enclaves in the area and accessible via a bridge. The entire municipality has been declared a nature reserve and, while the northern area is now urbanised, the south is pure nature. However, to give its ecosystem a break following several months of heavy tourism, our recommendation would be to visit Punta Cabalo.

Located in the northern part of the municipality, the Punta Cabalo lighthouse stands on a rocky peninsula. While there, you can enjoy an invigorating dip in its coves or spend an afternoon chilling out in its beach bars.

A Lanzada beach, in O Grove 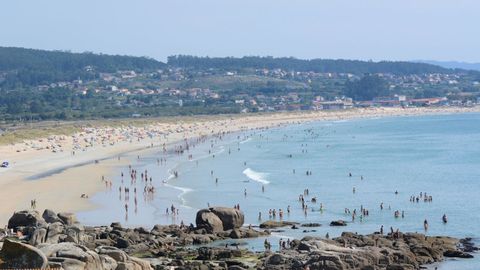 If what you really want to do is to sunbathe and splash around among other like-minded beachgoers, the most emblematic beach for tourism in the area is A Lanzada, which can be found on an isthmus joining O Grove with Sanxenxo. It boasts two kilometres of fine sand that every summer welcome the towels and sun loungers of those looking to enjoy a day in the sun, surf or take part in one of the most famous fertility rites in Galicia. As legend would have it, women who want to become pregnant must jump nine waves on the night of the last Saturday in August, on the summer solstice or on San Xoán. 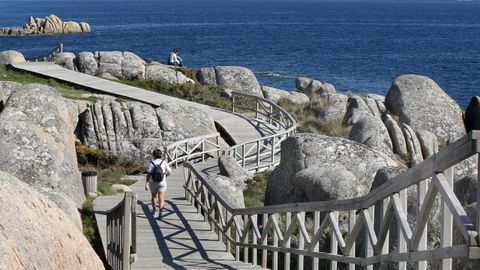 In O Grove you can also do more than just lying on a towel. For instance, you can walk along the Pedras Negras footpath, which runs from the famous marina of San Vicente do Mar to the beach of Canelas. As you walk along the wooden walkway you are sure to enjoy the sea breeze as you listen to the birdsong and look out to the island of Ons. 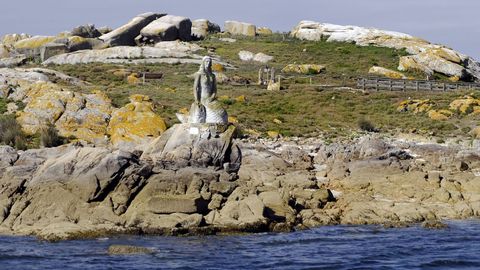 Sálvora is another of the islands that can be seen from O Grove. In fact, the boats that can take you to this enclave of the Galician Atlantic Islands National Park typically set sail from O Grove. Unlike Cíes and Ons, however, there is no regular service running between the island and the mainland. In return, it offers a nature experience without all the crowds. If you get the chance to head there on one of the excursions available, you will discover the natural wealth and stunning beauty of the Arousa estuary, where the archipelago acts as a natural barrier between the mussel rafts and the ocean.

Sálvora also maintains a well-preserved human footprint from times past. Its rich history can still be seen in the buildings that remain standing today. A prime example would be the Pazo de Goiáns, which now functions as a museum but was once a fish salting factory. The abandoned village, with its houses, granaries and wash house, also gives visitors an idea of what life was once like for the island’s inhabitants.

Another must-see attraction is the lighthouse, which was built after the Santa Isabel sank in a storm in 1921; a tragic event that resulted in 213 deaths, with only 56 survivors, who were rescued by a group of women from the island, widely known as the heroines of Sálvora. Yet this is just one of the stories for which the archipelago is known. The place is steeped in legend, such as that of the mermaid Mariña, whose sculpture appears to welcome visitors.

Mussel rafts in the Arousa estuary 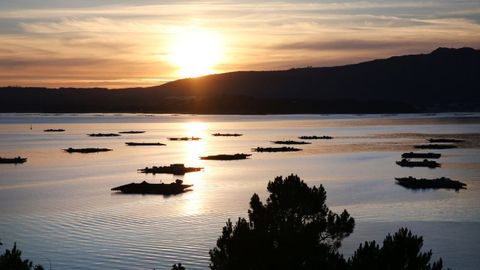 To enjoy the Arousa estuary in all its glory, you will need to experience it from the water. There are numerous nautical tourism offers that combine boat trips with experiences such as visiting the islands, tasting the local seafood and even visiting the mussel rafts. Given the sheer number of mussel festivals at which you can sample this culinary delight, by heading out to the rafts in a boat you can experience first-hand how the tasty mussels that fill the plates of the best restaurants to be found in the area are cultivated.